Mykonos is part of a cluster of islands including Delos, Rhenia and some rocky islets. Mykonos, already inhabited since the 5th millennium B.C. (prehistoric settlement of Ftelia), has shared with them a long and copious history with them. Its intense tourist and cosmopolitan activity, which has continiously kept Mykonos in the foreground, inevitably reminds us of the cosmopolitan ancient Delos during the period of its commercial peak (Hellenistic-roman period).

Since the fifties, Mykonos has always been one of the most popular tourist islands of the Mediterranean.

Chora, as the town of Mykonos is commonly known, impresses and casts its spell on the visitor from the first moment. With its beautiful position, scale and architecture, despite the great tourist development of the island, it manages to maintain its cycladic features and traditional look, like few other towns.

Its cube-shaped, all white houses glow in the sunlight, scattered wisely and orderly in the countless labyrinthine alleys and streets with whitewashed cobbled pavements. A little further, on a low hill, the windmills, having stood for centuries, compose a picture of unparalleled beauty in combination with red domes and bell towers of the countless churches. In the harbour, a small colorful flotilla of caiques and fishing boats completes this unique picture with its vivid colors.

All in all, maintaining the form of the traditional architecture of the Cyclades on the modern buildings ensures a unique feeling of harmony to the town and interior of Mykonos. Nothing can be compared, though, to the emotion inspired by the enthralling space of ancient Delos. A real town with its streets and markets, public buildings and temples, luxurious houses and shops, cisterns, columns, mosaics…

Bathed in perennial sunlight sent by the god Apollo, they are all spread between the hill of Mt. Kynthos and the port with its crystal clear waters, giving the visitor the impression that they stopped functioning only yesterday.

The fame of the island and the large number of visitors, among whom one can recognize some of the most famous personalities all over the world, have resulted in the commercial activity that has made the market of Mykonos so famous.

So, in the streets of Mykonos, most important of which is Matoyianni, one can buy clothes, jewellery and works of art designed by the most celebrated designers and artists. One wouldn’t exaggerate if one said that, quite often, this is where the trends in fashion and style to prevail worldwide are decided.

One can enjoy one coffee, or ouzo with titbit and the traditional tastes at the cafes. Bars and restaurants scattered all around, and observe at the same time, a colorful crowd wandering in the narrow streets of the town.

Chora is also the starting point if you want to discover the rest of the beauties of the island, its picturesque interior and spotless beaches, using a regular bus service or other means of transport. 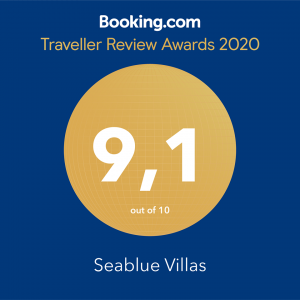 Early Booking and save up to 10%

The best experience ever. Would recommended it to everyone. We stayed two weeks in Mykonos at the Seablue villas, and it was a dream come true.